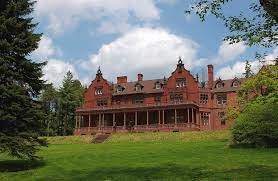 Join us for a Saturday-afternoon screening of Gatsby in Connecticut at the magnificent Ventfort Hall. The historic Jacobean-style mansion was the former home of Sarah Morgan, JP Morgan’s sister. Make sure to come early to take a tour of the renowned mansion, splendid grounds and gilded age museum. After the screening there will be a discussion about the making of the documentary as well as a Q&A session.

This is a live event, not virtual!

¸We are honored to be part of AARP’s April 2021 Movies for Grownups program. Each month AARP screens four films. Gatsby in Connecticut will be featured in the same month as Best Picture Oscar winner Parasite. 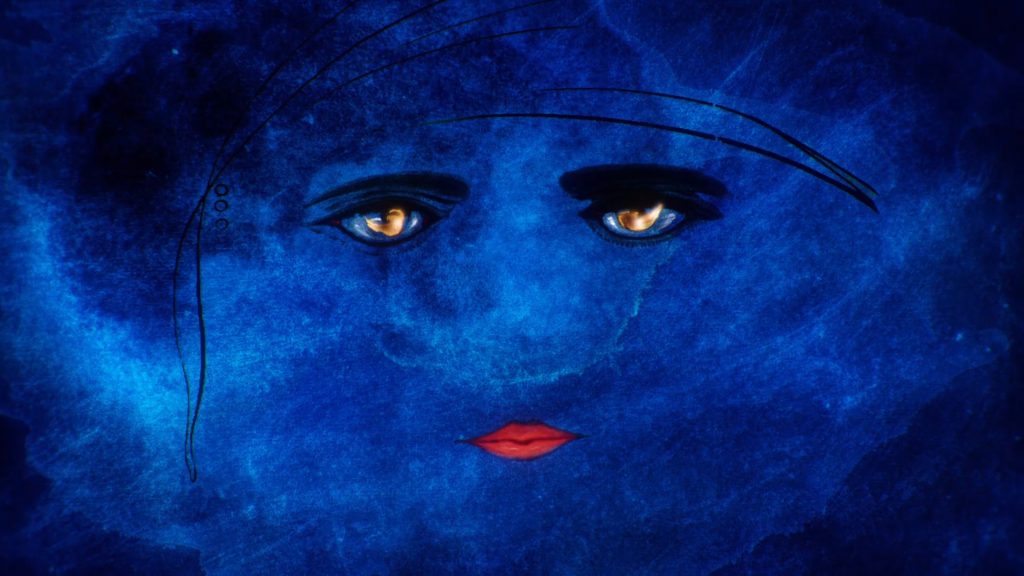 For those trying to find Gatsby in Connecticut on Amazon Prime in the US & Canada, we were recently taken down despite great reviews and over 85,000 people watching it there. Robert Steven Williams, the director of Gatsby in Connecticut was asked by the International Documentary Association to write a piece about what had happened for the entire independent filmmaker community, apparently thousands of films were taken down by Amazon, who have opted to change their policy toward independent film. You can read the entire piece HERE.

Gatsby in Connecticut is still available on a variety of digital platforms and cable outlets, and you can find them below. The distributor for the film is working on a US broadcast deal now, as well as deals for a many countries, and as soon as we know more, we’ll announce it. 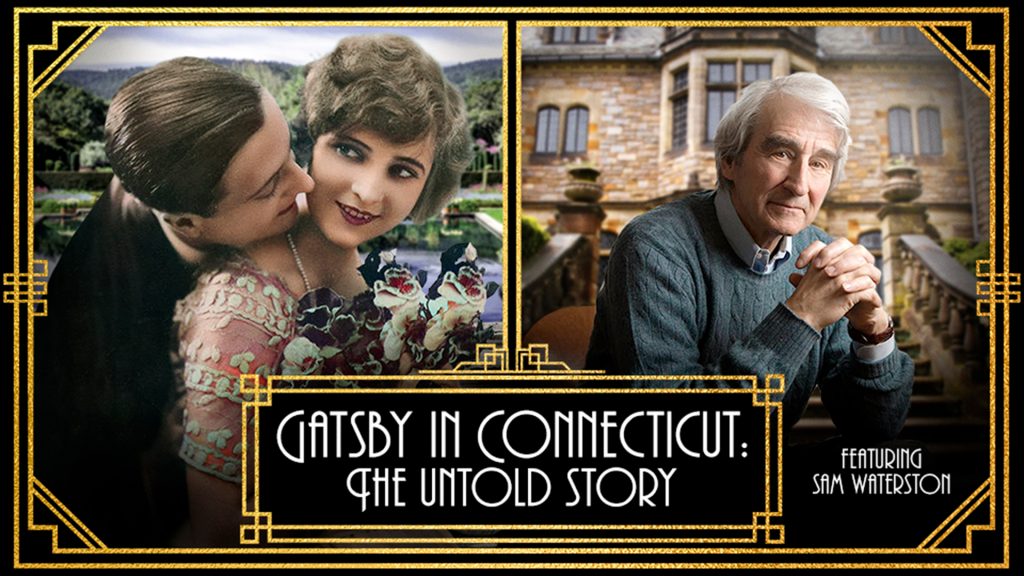 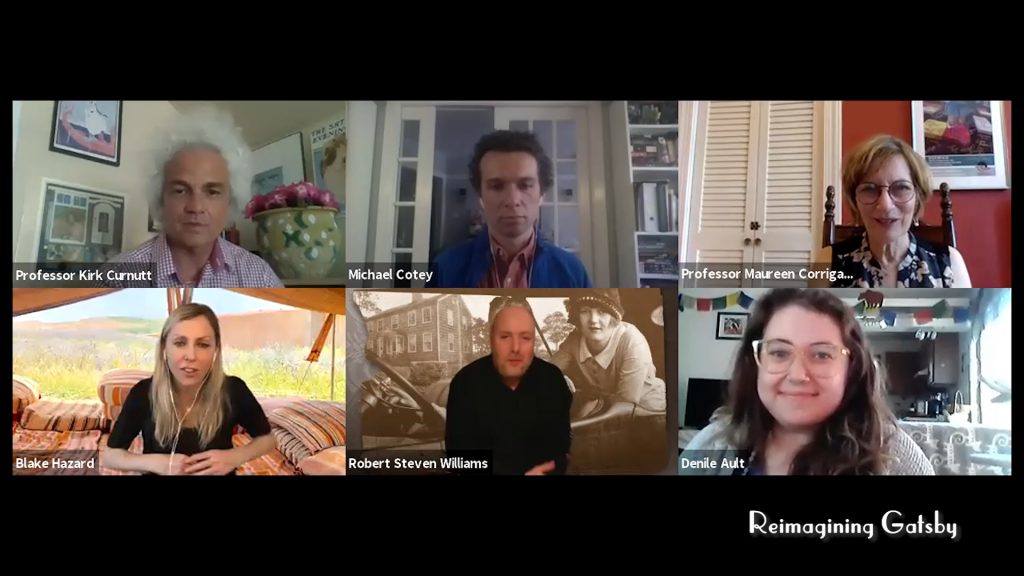 A FUNDRAISER FOR FEEDING AMERICA

In 2020 Against the Grain Productions produced six installments of The Fitzgerald Pandemic Webinar Series, attended by several thousand Fitzgerald lovers, the series featured 17 world-renowned scholars, raising nearly $8,000 for Feeding America in the name of Scott and Zelda Fitzgerald.

Hosted by the director of Gatsby in Connecticut’s director, Robert Steven Williams. Moderated by Professor Kirk Curnutt, president of the F. Scott Fitzgerald Society. These video replays are available for educational purposes free of charge. Many high schools and universities are already using them as a complement to their current on-line teaching environment.

We are honored and humbled to be selected by The New Yorker as one of the Best Movies of 2020. We’d like to thank all the people who gave us a hand along the way. Most important we want to thank Sam Waterston and Keir Dullea for so generously giving of their time. We’d also like to thank Richard Brody, the esteemed movie critic and brilliant writer for taking the time to watch our film, and for being so kind and generous, his keen interest in our film has made all the difference in getting the word out.

Have a happy and safe holiday everyone. 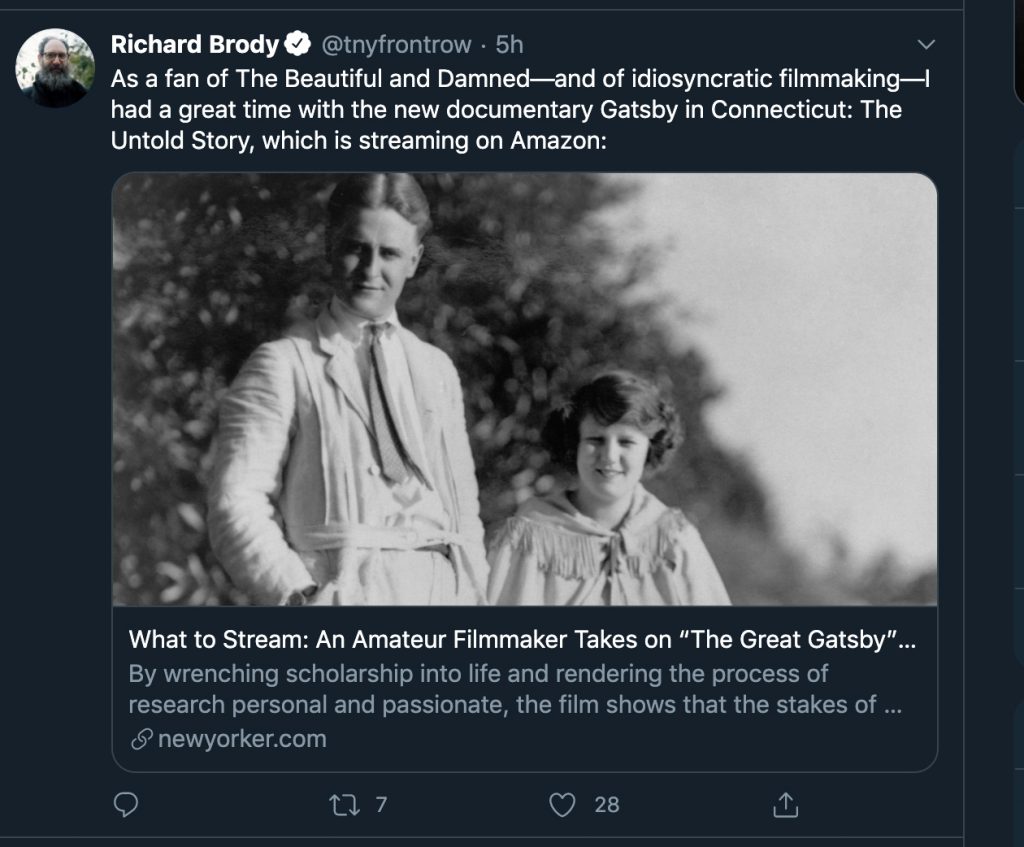 “In a difficult year for so many, it was an honor to receive this award from the Mystic Film Festival. The team there braved the virus and hosted an actual event with live screenings carefully structured to keep everyone safe.”

Williams adds, “The film resonates with many at a time when folks need a break from politics and the pandemic. Gatsby in Connecticut is a seventy-minute journey back in time to 1920, when Scott and Zelda celebrated their honeymoon and the seeds of The Great Gatsby were sown.” 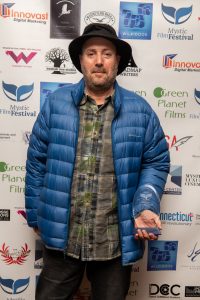 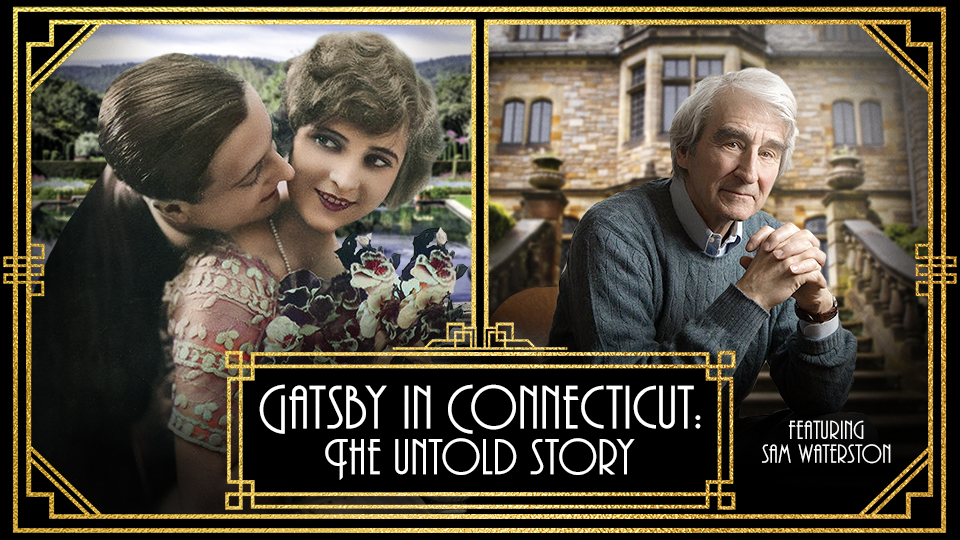 Gatsby in Connecticut is available on the major digital platforms and cable carriers in the US and Canada. Please rent or buy and if you enjoyed it, please spread the word and review it, this is an important part of the process to get our documentary out into the world. Thanks so much. Here’s where you can rent, download or get the DVD with special bonus features: 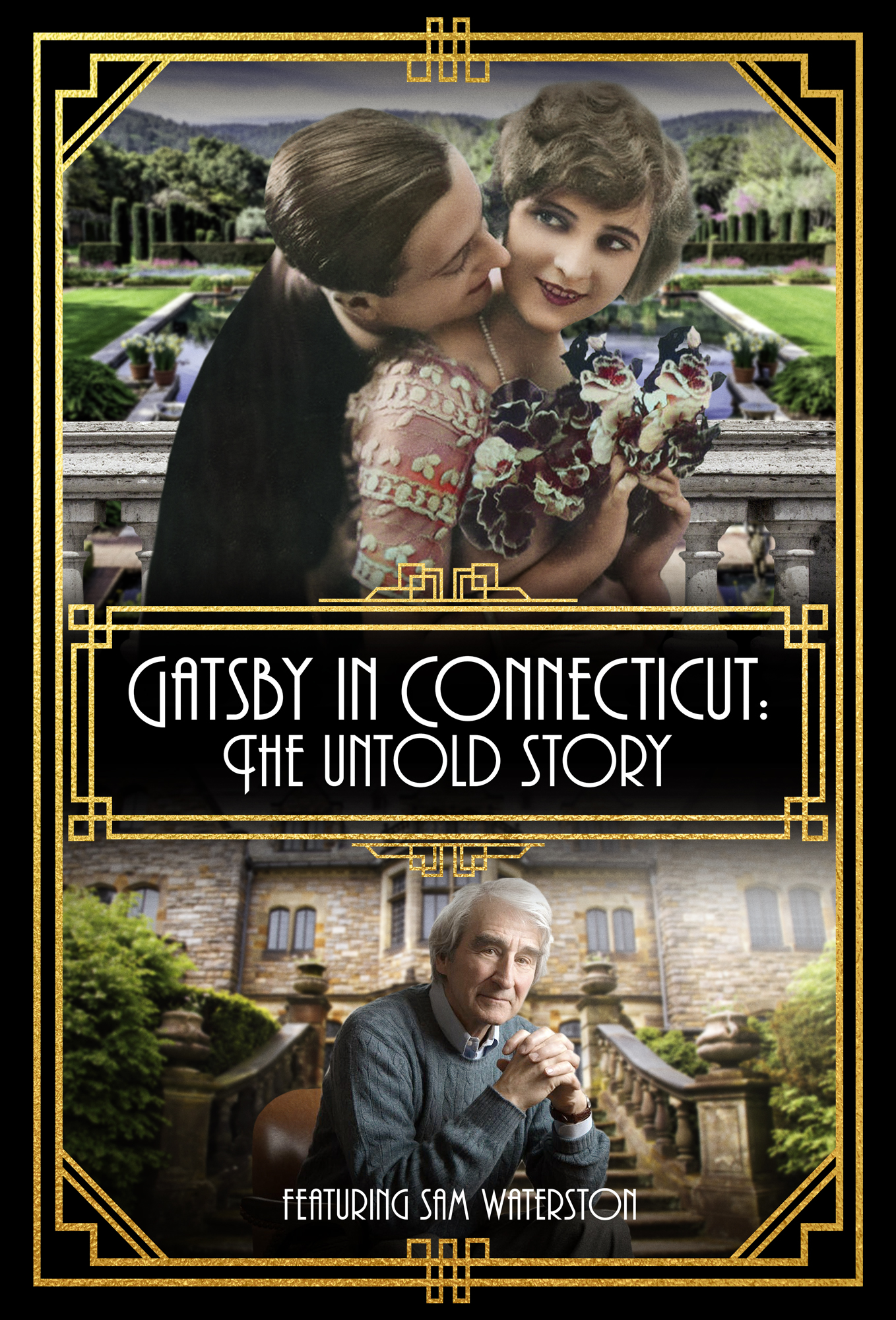 Available on Video on Demand September 1, 2020

Wanted to thank the Gatsby in Connecticut team for all the hard work getting this over the finish line, as well as the folks at Vision who have been so helpful in setting the stage for our big launch September 1. Also want to thank Sam and Keir for their amazing contributions to the film. 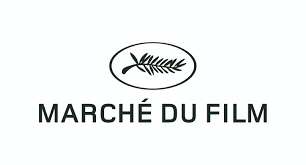 Gatsby in Connecticut: The Untold Story will screen at the International Virtual Market this year in Cannes. Represented by Alex Nohe of Blood, Sweat & Honey, we recently signed a worldwide distribution deal with Los Angeles based Vision Films. 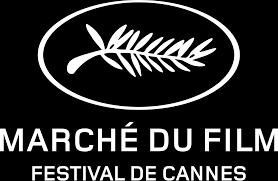 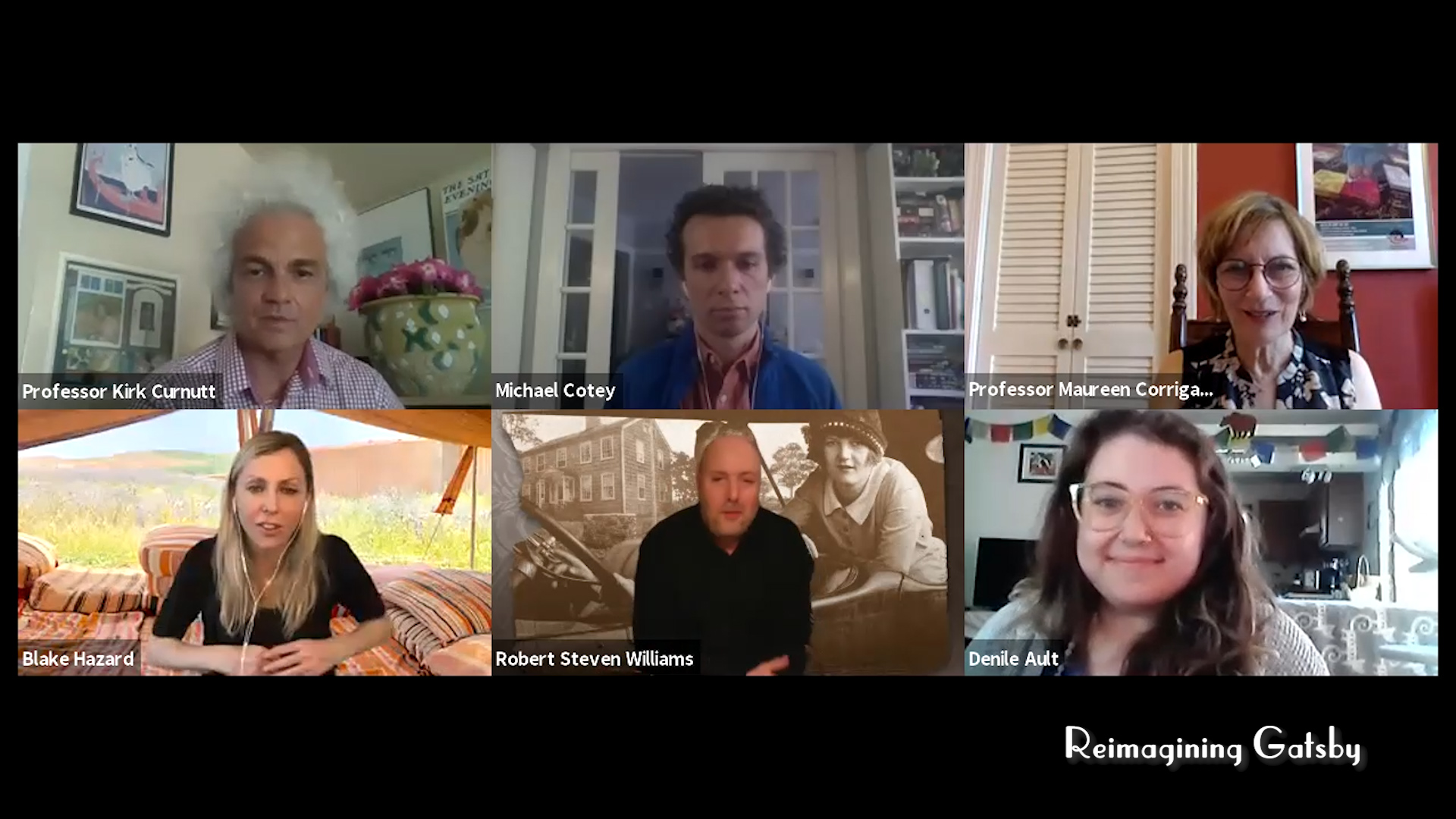 For the past two months the team at Gatsby in Connecticut and Against the Grain Productions have hosted a series of Fitzgerald webinars featuring world-renowned scholars as well as Scott and Zelda’s great granddaughter, Blake Hazard. The series was co-sponsored by Scribner Books and the F. Scott Fitzgerald Society. Nearly $4,000 was raised in the process for Feeding America.

Three of the four webinars were recorded and can be viewed here:

The Beautiful and Damned

Look for more webinars in August, but for now, we’re going to catch our breath and recharge our own jets. We hope that soon we can find ways to heal, love and fix what’s broke.

Be well. Be strong.